The year 1950, the setting Chicago Illinois, a group of local doctors and lawyers organized to form what would now become the oldest exclusive club of its kind in the United States. A club that would demand the highest standards of conduct from its members while providing a safe-haven to foster their deep passion for the game of golf.  Although men of means, high moral character, and pillars within their communities, they were often scoffed at when entertained as recreational/amateur golfers. This resulted in the exclusion from many clubs in the area due to nothing more than the color of their skin. These men of stature at the time had little choice in the golf facilities they could play, so when they did find one that would accept them, they would all get together for some friendly competition on the green. The Nomads Golf Club was founded in 1950 by this group of black men who loved the game, even though the game did not seem to love them in return.  A “Caucasians Only” policy enacted by the Professional Golf Association meant that most golf facilities had a license to turn away African Americans without a question, even at public golf courses in public parks. And so, because the original members were forced to travel far and wide to find courses that would allow them to play, they adopted the name "The Nomads". They were golfers without a home.

Before entering their various professions, many of the founding members learned the game working as caddies in the area, igniting their golf interest and producing some of the best “unknown” amateur golfers in the Chicago region at the time.  Unknown only because of their lack of acceptance in local and regional tournaments due to their hue.

Prominent Nomad club members in the early years included track and field Olympians Jesse Owens and Ralph Metcalfe. Over a short time, the club grew in size to include some of the very first African American doctors, lawyers and other professionals rising up through the new middle class of the 50’s era. 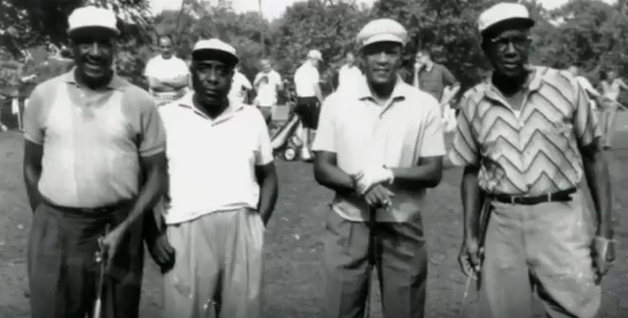 To a man, the Nomads were successful individuals who had survived the daily challenge of being black and male and American in the first half of the 20th Century, the so-called American Century. They shared a belief that their achievements in life and their passion for the game set them apart, and they made no apologies about wanting to enjoy a middle-class life.

By trading on the celebrity of their most high-profile members and the overall professionalism of the men in the club, the Nomads slowly expanded the roster of courses where they were welcomed. While seldom acknowledged in the history of the Civil Rights Movement, this push to gain equal access to all public facilities was a critical spoke in the wheel of the movement. The Nomads forced the question: Why shouldn’t black professionals enjoy the same benefits of their labor, and the same entitlements of middle-class life as their white counterparts? As Rosa Parks was refusing to give up her seat on a bus in Montgomery, Alabama, the Nomads were insisting on their right to participate in all aspects of American life – the vanguard in the Raisin-in-the-Sun Revolution that infiltrated the American suburbs.

Today the Nomads are one of the most exclusive golf clubs in America, with only 70 members across the nation, who meet once a year in July.  They still have no official club home and retain their founding title as Nomads with great pride. Their members today as in their founding years, are comprised of the country’s top African American doctors, lawyers, politicians and business professionals and because for almost 70 years they have wandered from course to course, not by choice but because of the color of their skin, the club now enjoys the nomad experience of traveling and playing the very courses that would have denied them entry decades ago.

60 Minutes CBS special on The Nomads